The Isles got ready to hand an ass-kicking out to the Rangers tomorrow night with a win yesterday against the conference leading Canadiens of Montreal. They won 6-3 with the sixth goal coming on an empty netter. I don’t think those should count; like, they should count towards the score, but an empty net goal takes no real work. I understand it’s 6 v 5, but the further the goalie is from the goal the better your chances increase, exponentially. With nothing blocking the net your area of attack increases. Anyway, JT had a goal. Though he has dropped from the top of the leaderboard in Goals Scored, his team has been winning while it’s happened. For the love of God, Grabner scored on something that wasn’t a breakaway last night. We’re taking down the Rangers, sprinting past the Devils and heading to the glory land baby. This year I wanna be chanting “We got the cup! We got the cup!” 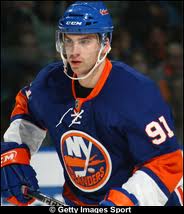 JT is a boss. #mancrush #nohomo